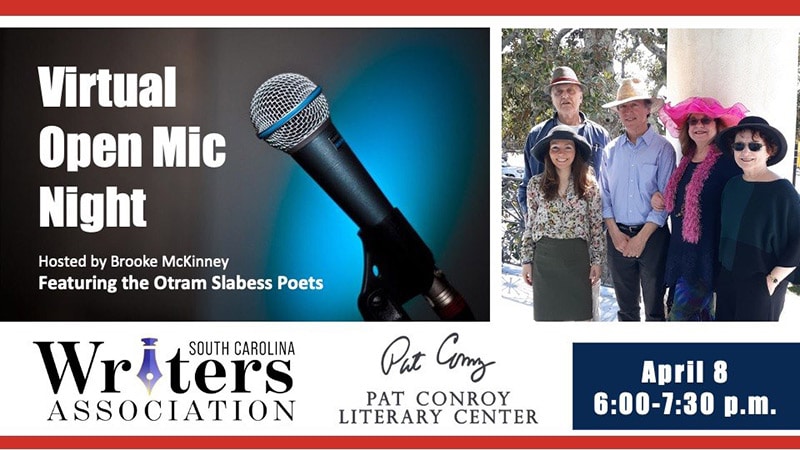 Our monthly virtual Open Mic Night is hosted by Brooke McKinney and presented in partnership between the Pat Conroy Literary Center and the South Carolina Writers Association. Our featured writers for April are the poets of the Otram Slabess writers group. Join us live on the Conroy Center’s Facebook page for readings by a pantheon of participating writers from in and beyond our South Carolina lowcountry.

We want to build our community of writers and an appreciation for the art and talent of new, emerging, and long-time writers. Thank you for supporting this partnership!

About our featured writers:
Otram Slabess is a group of writers who began getting together over 15 years ago–originally Fred Bassett, Warren Slesinger, Sheila Tombe, and Quitman Marshall. Named after a 13th-century Persian poet, the group, expanding from its fairly regular meetings, started having public readings every April (National Poetry Month) in the lovely courtyard of the Charles Street Gallery. Over time, members moved on to other towns and countries, and new members joined, including Steve Johnson, Jacquelyn Markham, Teresa Bruce, Olivia Stiffler, and Emily Davis-Fletcher. The Otram Slabess group takes its motto from the late Nobel laureate Joseph Brodsky: Poetry is our evolutionary beacon.

Current Members:
Jacquelyn Markham has loved and written poetry since childhood. As a freshman in college, she decided to make a career of it. After her bachelor’s degree in English, she earned a masters and a doctorate in English and Creative Writing from Florida State University. Author of two chapbooks and a collection, she has published nationally and internationally in literary journals, magazines, and anthologies, including Archive: South Carolina Poetry Since 2005, Adrienne Rich: A Tribute Anthology, Anthology of Appalachian Writers, Lullwater Review, Hawaii Pacific Review, The High Window, Woman and Earth, among others. Dr. Markham is the recipient of numerous grants and awards for literary merit and the Adele Mellen Prize for distinguished contribution to scholarship. She has taught creative and expository writing, literature, and women’s studies in universities and communities. She lives and works on the coast of South Carolina.

Olivia Stiffler is the author of two books of poetry. The first, Otherwise, we are safe (Dos Madres Press, 2013) was included by Writer’s Almanac in its Best of 2014. The second, Hiding in Plain Sight (Dos Madres Press) was published in 2017. Stiffler’s poems are included in the anthology Realms of the Mothers (Dos Madres, 2016) and in the 2018 Furman University anthology Archive: South Carolina Poetry Since 2005. Stiffler worked for 26 years as a freelance stenotype reporter and partner in Alpha Reporting Service in Springfield, Missouri, before retiring with her husband to Georgia and subsequently moving on to the Lowcountry. She began writing in earnest in 2007 as part of the Zona Rosa writers’ workshop in Savannah. There, in 2012, she met visiting New York poet the late James Tolan, who became her mentor and editor and who ultimately helped bring her work to publication. www.oliviastiffler.com.

Quitman Marshall’s book of poems, his fifth, You Were Born One Time, won the SC Poetry Archives Book Prize in 2013. A founding host of the Literary Series at Spoleto Festival USA and a winner of the Writers Exchange Award (Poets & Writers), he is presently sailing three manuscripts: Swampitude (nonfiction); The Bloody Point (novel); and American Folklore (poetry). Since 2001 he has lived in Beaufort, SC, with his wife and now three children.

Emily Davis-Fletcher earned her BFA in creative writing from Stephens College and her MA in women’s studies from the National University of Ireland Galway. She has taught creativity and poetry workshops at the University of South Carolina Beaufort and the Pat Conroy Literary Center. In 2018, Emily was selected to read at the Cork International Poetry Festival; and her poem ‘Sow Calling’ was a finalist in the Sublingua Prize for Poetry 2019. Currently, Emily is writing her debut poetry manuscript, My Half of Night.