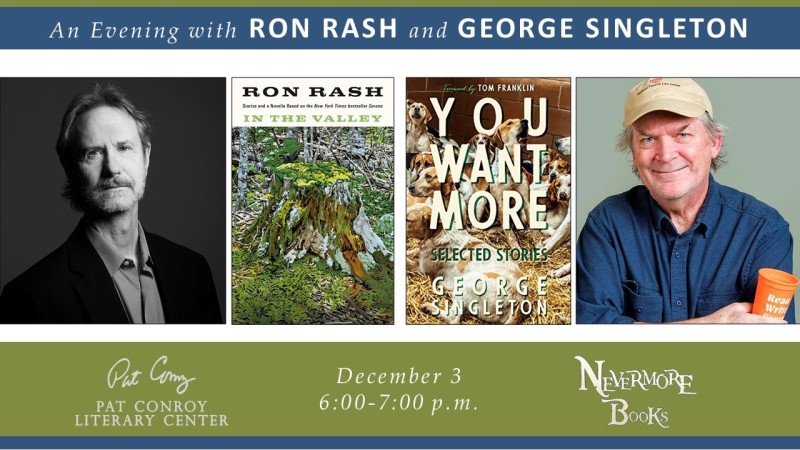 Join us for a lively virtual conversation with southern storytellers Ron Rash and George Singleton as they read from and discuss their recently released story collections–In the Valley and You Want More. This free program will be moderated by Brooke McKinney, the Pat Conroy Literary Center’s communications and events coordinator.

A long-revered presence in the landscape of American letters, Ron Rash has been called “one of the great American authors at work today” (Janet Maslin, The New York Times). A two-time PEN/Faulkner finalist, two-time O. Henry Short Story Prize winner, and Frank O’Connor International Short Story Award winner, Rash burst onto the national scene with his 2008 New York Times bestseller Serena, which earned him comparisons to “John Steinbeck and Cormac McCarthy.” Now, the virtuosic novelist, poet, and storywriter offers a collection of ten searing stories with In The Valley. In these stories, Rash spins a haunting allegory of the times we live in—rampant capitalism, the pillaging of the natural world, the opioid crisis, and more—and yet within this world he illuminates acts of extraordinary decency and heroism. Rash also revisits Serena Pemberton, the villainess of his acclaimed novel Serena.

With his signature darkly acerbic and sharp-witted humor, George Singleton has built a reputation as one of the most astute and wise observers of the South. In You Want More, Tom Franklin introduces this master of the form with a compilation of acclaimed and prize-winning short fiction spanning twenty years and eight collections, including stories originally published in outlets like the Atlantic Monthly, Harper’s, Playboy, the Georgia Review, the Southern Review, and many more. These stories bear the influence of Flannery O’Connor and Raymond Carver, at other times Lewis Nordan and Donald Barthelme, and touch on the mysteries of childhood, the complexities of human relationships, and the absurdity of everyday life, with its inexorable defeats and small triumphs.

Register in advance to join us on Zoom: Event has passed

Signed copies of Ron Rash’s In the Valley and George Singleton’s You Want More are available from Beaufort’s NeverMore Books. Contact the store for details. www.nevermorebooks.com

Ron Rash is the author of the PEN/Faulkner finalist and New York Times bestselling novel Serena, in addition to the critically acclaimed novels The Risen, Above the Waterfall, The Cove, One Foot in Eden, Saints at the River, and The World Made Straight; four collections of poems; and six collections of stories, among them Burning Bright, which won the 2010 Frank O’Connor International Short Story Award, Nothing Gold Can Stay, a New York Times bestseller, and Chemistry and Other Stories, which was a finalist for the 2007 PEN/Faulkner Award. Twice the recipient of the O. Henry Prize and winner of the 2019 Sidney Lanier Prize for Southern Literature, he is the Parris Distinguished Professor in Appalachian Cultural Studies at Western Carolina University and lives in Clemson, SC.

George Singleton has published eight collections of stories, two novels, and a book of writing advice. Over 200 of his stories have appeared in magazines such as the Atlantic Monthly, Harper’s, Playboy, the Georgia Review, the Southern Review, the Cincinnati Review, and elsewhere. He is the recipient of a Pushcart Prize, a Guggenheim fellowship, the Hillsdale Award from the Fellowship of Southern Writers, and the Corrington Award for Literary Excellence. He lives in Spartanburg, SC.