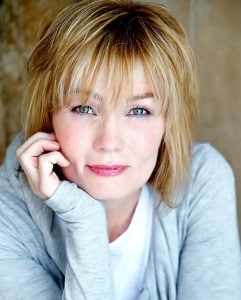 Publishing doesn’t make you a writer, writing does. The difference between who I was before I sold the book and who I was after was one phone call and that’s it.

Porch Talk is pleased to welcome Kerry Kletter, author of the debut YA novel The First Time She Drowned, an American Library Association’s Booklist magazine’s Top 10 for Youth selection. A former film and TV actress, Kerry lives and writes in Santa Monica, California. Kerry joins us on the Porch to share some reflections from her writing life.

Janis Owens: Kerry, welcome to the Porch. I know that Pat was a great admirer of your writing. There are a million stories of Pat sightings and Pat discoveries. Would you mind sharing yours?

Kerry Kletter: Oh how I wish I had a Pat sighting! It was always my dream to meet him, but I never got the chance.  But I do have a Pat-discovery and a Pat story.

I was in my early twenties when I first read The Prince of Tides. I wish I could show you my copy, how love-worn it is, how almost every sentence is underlined, how it sits face out in the center of my bookshelf—the book that changed the course of my life in so many ways. I went on to read every book Pat ever wrote, studying his rhythms and the architecture of his sentences. Through his work he taught me the power of language, the way it could both elevate and damn, the way it could beckon the wounded back into the world with the perfect description of an oyster, the smell of the low country marsh, the memory of walking between the backs of beached pilot whales. He taught me how books could serve as a witness, a mirror, and a guide. And through the way he lived his life, he taught me that the best way to survive pain is not to close your heart, but to open it wider, to live generously, compassionately, with one hand always reaching back to pull others forward.

I became a writer because of him. After I sold my first book, I wanted so desperately for him to see it, to know what an influence he had on me. I have a friend whose family lives in Pat’s hometown of Beaufort, South Carolina, so I sent her mother an advanced copy along with a letter to Pat in the hopes that she might run into him. As the story goes, she tracked Pat down at the local gym, my book and letter in hand. She did not ask him to read it, nor did I. In fact, I told him that I knew he couldn’t possibly have the time, that I was sure everyone sent him their book and that I wanted nothing more than for him to see it. It was enough to have the opportunity to tell him how much he meant to me, how he had mentored me without even knowing it, to show him the physical proof and say, “Look coach! I did it!”

A few weeks later I received a stack of Pat’s books in the mail, which he had signed, along with a beautiful note about my writing and my book. He had actually read the whole thing! Not only that, he gave me a blurb for the back jacket! I never met Pat but that is who he was. And yes, that story will make me cry until I am old and gray.

JO: Your writing has been praised for its imagery and richness of prose. Do you edit or rewrite often, or put it on the page in longhand, as Pat did, and let it go?

KK: Oh thank you! My process seems to change with each book, but I would say that I usually try to put a hundred pages down at a time without editing. I do this on my laptop, using the “hunt and peck method” because I never actually learned how to type. Then I have to fix those pages before I can move on to the next hundred. Once I have a full manuscript, I edit until the words stop making sense because I’ve read it so many times. And then maybe a few more times after that. I can easily spend an hour on one sentence.

JO: All unpublished writers wonder when that big break will come. When did yours come? And when did you start calling yourself a Writer? Before publication? Or after?

KK: You know it’s funny, my big break came, as so often seems to happen, right when it seemed that all hope was lost. I remember standing on the beach one morning, convinced that my manuscript would never sell, that I had done all that work and no one would ever see it. And I remember feeling both very sad and also realizing in that moment that I would be okay, that even though it was heartbreaking, it would not mean that I was a failure. I would still be happy in my life and glad that I wrote the book even if it was only for myself. For me, that moment WAS my big break because it changed my relationship with the idea of success. I think it was about a week later that we got the offer from Penguin. 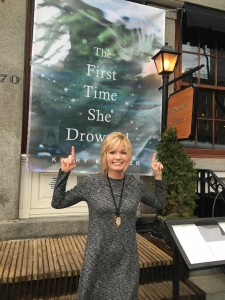 JO: What are you working on now?

KK: I am finishing the final draft of my second novel. I’m afraid I’ll jinx it if I say more than that!

JO: And last but not least, do you have any hard-won wisdom you’d care to share about writing?

KK: Early on in my novel writing life, an author friend told me to get a book on screenplay structure and study it and I consider that the best advice I’ve ever gotten simply because it pushes you to boil down story to its most basic elements. I would also say that it’s essential, or at least it has been for me, to be driven by a need to always be improving, rather than by the desire to be validated by others or to rest on your laurels. It makes constructive criticism from your teachers not only easier to take, but actually exciting to get. Finally, make writer friends, champion others, and never compare yourself to anyone else’s work or success. Everyone has his or her own journey, and what someone else has today you might have tomorrow.

JO: Thanks so much for joining us on the porch.

KK: Thank you for having me!

JO: For more about Kerry, head on over to her website at www.kerrykletter.com. And we’ll see y’all next time, right here on the Porch. 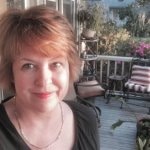