I laugh when I read this snippet of Pat’s memoir because, like all his commentary on writing, it is so true, so wise and so very Conroy. 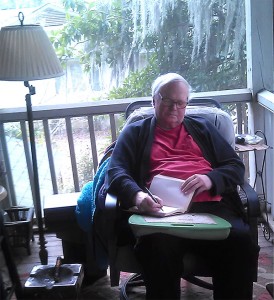 By the time I met him in 2003 and we became friends, he had long crossed the cultural divide from acclaimed to iconic, which he pretty much loathed (his word). He did enjoy obsessing about his obsession, and did so, in his journals and by phone, all the time. He seemed afraid that the rest of his writer friends, not having achieved a quarter of his success, might actually do that thing we all constantly threatened and give up writing in favor of a day job.

To Pat, quitting was not an option, and being both persuasive and generous, he urged the rest of us forward with an enthusiasm that was equal parts drill instructor, evangelist and hustling point guard. He could not actually make the shot for us, but he could get us to the paint with his constant advice and encouragement. They were offered with the ferocity of old Santini, that we play harder, run faster; repent of timidity and write something that made our readers laugh; that made them weep.

A lesser man would have settled for cry, but Pat was not a lesser man. His iconic status wasn’t built on minimalism, and I never saw him, in life or in fiction, choose a pedestrian word when a brighter, older, more emotive word would do. Weep is a good example: a word with multiple vowels and cultural roots, and that sound, that eeeee. In the hands of a good storyteller, on the right part of the page, it could break your heart – which was exactly Pat’s intention; if not to break, at least to bruise.

To him, good writing was like good basketball: a contact sport. In order to achieve loft in storytelling, you had to be willing to wade in and risk ridicule; to lose a little skin in the game. He was the first one to admit it was a perilous occupation. When asked about the high rate of mental illness among writers, he pointed out that one of the requirements of the life was that you sat alone all day in a room, just you and a desk and four walls. It was solitary confinement. With critics.

The solitude would break you if you let it, and when released from his desk, he sought out kindred spirits; fellow writers who were also doing time in solitary, searching for that perfect word. He called a round of friends almost every day, and spent most of his evenings on his favorite talking and visiting spot: the back porch of his house in Beaufort that had a glorious sunset view of Battery Creek. He called it the Cigar Porch because good cigars were the single vice he was allowed to the end – that and discussing his religion: good writing.

Come and join us here on his digital porch where we will let down our hair and indulge in some porch talk of our own, with plenty of laughter, encouragement, and good advice on all the perilous and rewarding aspects of the writing life. Our contributors will be drawn from every state in the union, and every discipline, some bestselling and well-known, others you will be happy to meet. We’ll also showcase a few academics, along with essays by our own writing teachers and staff and snippets of wisdom from the hand of the Master himself, who will loom so close that you’ll be able to detect the smell of a fine cigar.

Please join us as often as you can, either online or in our new home in Beaufort. Trust me, Pat would have been glad to see you. He was a famous host and a devout writer to the end; never happier than when he had a convert.