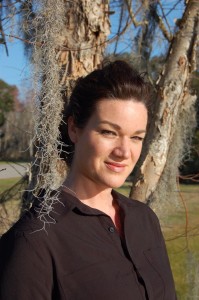 “That’s what it is to be a storyteller. It’s a calling to tell the tales that help us to know who we are.”

Novelist J.C. (Jana) Sasser lives amid the woods and marshes of South Carolina’s Edisto Island, halfway between Beaufort and Charleston and seemingly halfway between the present and the past. Once home to novelist Bren McClain, Sasser’s house is a converted barn that dates at least to the 1930s and is made in part from wood reclaimed from the caretaker’s home on the plantation property of William Gilmore Simms, antebellum South Carolina’s most prolific writer. Sasser, a native of Savannah who grew up in the small town of Metter, Georgia, must climb a ladder to enter her attic writing room, an almost reverential act of passage into the heart of this peculiar house with its decidedly literary bones. Sasser’s first novel Gradle Bird, is a southern gothic tour de force that was a finalist for the 2015 William Faulkner-William Wisdom Award and is already an official selection of the Pulpwood Queens, the largest book club in the United States. Sasser talks about her novel and her writing life in this interview (which originally appeared in Shrimp, Collards & Grits magazine).

Jonathan Haupt: Jana, welcome to the Porch. Let’s talk about Gradle Bird herself. As a sixteen-year-old awkward but burgeoning beauty with a tremendous capacity for empathy, young Gradle is cut from the same cloth as iconic southern coming-of-age protagonists Scout Finch and Ellen Foster. How would you describe Gradle’s character and your influences for her?

J.C. Sasser: I remember reading To Kill a Mocking Bird as a girl and thinking, “I’m her! I’m Scout!” I’ve always identified with that particular vision of the South and of childhood. There’s no question that Jean Louise Finch is a big part of where Gradle came from—as am I. The crux of Gradle’s character, and what makes her so compelling as a writer (and hopefully as a reader), is that she’s wounded. She’s growing up without a mother or a father, in the custody of a grandfather who can’t look at her or speak to her because she reminds him of a past that’s crippling him. Because she’s wounded by these voids in her life, she’s able to understand how those around her are wounded too. And she really does want to see the best in everyone—when she can.

JCS: Gradle is seeking male attention and trying to balance her need for the father figure who’s been missing her whole life and the complexities of attraction attached to her approaching adulthood. She’s in a state of self-discovery, of figuring out her sense of identity and self-worth. Because of her isolation and her absence of parents and role models, there’s more at stake for her in the relationships she’s trying to foster with the men and boys in her life.

JH: After a childish prank goes wrong, Gradle forges a curious friendship with the equally curious hermit and singer Delvis Miles, and they discover how connected their lives are. Who was the inspiration for Delvis?

JCS: Many of my characters have a basis in reality, and that’s certainly true of Delvis. When my mother was working in the court house she would meet many of our small town’s “characters,” and one was a singing hermit who lived out in the woods with a woman he called his wife. He gave my mother a cassette he had made of some of his songs, and like Delvis’s tape in the novel, it was a mix of singing and talking to her as though she was in the room. When I first listened to it, I knew I had to meet him. I was a teenager at the time and I drove out to his house. There was an organized chaos to how he lived, and his understanding of reality was fantastical. I’m convinced he was a genius, but he was also mentally ill. My fascination with him led to a friendship and to our correspondence, paralleling what I wrote for Gradle and Delvis. I told him, even as a teenager, that I was going to write a book about him one day. I set out to honor him through the character of Delvis and to discover what can happen to someone so marginalized when he is brought into contact with these other characters and a dark twist of their shared fate.

“At its enormous if also guarded heart, Gradle Bird pits the unbreakable bonds of family (“family” in the intimate sense as well as in the big, inclusive southern sense) against the weight of the past still hung inescapably around the throat of the present. In the conflict between these two factions, Sasser leads us to consider what cruelties and crimes, if any, are truly beyond redemption and if we can be worthy of forgiveness and mercy when the most damaging force in our lives is so often ourselves.”–Charleston Post & Courier

JH: Gradle and her grandfather Leonard move through a magical vision of the gothic South, one that allows for the possibility of ghosts and destiny. It’s also a place where the past and present are unfolding simultaneously. What’s the effect of the weight of the past for your characters?

JCS: Each of my characters is trapped by self-imposed guilt. They’ve put that on themselves in acts of penance. Leonard is burdened by what he’s done and not done, and it has caused him to remove himself and Gradle from the world. Annalee Spivey feels such guilt over the son she abandoned that she took her own life, but even that hasn’t freed her. Gradle wants to atone for her part in an act of cruelty against Delvis, which lets him become a surrogate father to her, but this also puts them in jeopardy. Delvis takes two lives in the novel, but he has a ritual he goes through each time to absolve himself. In some ways, he’s has the healthiest relationship with his guilt.

JH: Your characters are all haunted—some in a very literal sense. In the world of Gradle Bird, is redemption possible? Is forgiveness?

JCS: That question is central to the novel. I’m interested in understanding the cruelty of human nature, of what makes some people want to humiliate or harm the weakest among us, the outsiders and the misfits. In nature, the weak get picked off. Gradle Bird explores our worst instincts and our best, to harm but also to heal, and the story asks what it truly takes to make amends. I always had in mind the novel’s last line, through all the revisions, and it’s my answer the question of whether any of us can ever move on from our pasts. 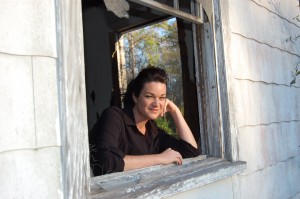 JH: How does one get to be a southern gothic writer?

JCS: It helps to have a southern gothic childhood. I grew up immersed in wilderness and wonder and in a family and community rich with stories and oddball characters. I think about the man I based Delvis Miles on and wonder, “Why me? Why was I entrusted with his story?” But that’s what it is to be a storyteller. It’s a calling to tell the tales that help us to know who we are. My education is in biology, which is the study of life. But fiction is also a study of living, the telling of life’s truest truths presented in stories so we can absorb them. My life has been a bit more gothic than most, and those are the stories I’ve been called on to share.

JH: Who have been the great storytellers in your life?

JCS: My father Hugh Esten Cromartie Jr. was a masterful storyteller and I’m so fortunate to be his daughter. Through much of his troubled life, he found it easier to relate to animals than people. He was a legendary whitetail deer hunter, but he was paralyzed in a hunting accident when I was four years old. Storytelling became a healing act for him. I have a treasure trove of stories that he wrote and others I recorded him telling. My maternal grandmother Rubye Trapnell Becker was a born storyteller too. She had a wonderful way of entering stories, of immediately earning your attention and holding it. She could also balance dark moments and light, tragedy and humor. She published a novel at 93, Rebel, which is incredible.

JH: Gradle Bird is your first published novel. What part of the long path from manuscript to publication have you most enjoyed? What has come as the biggest surprise?

JCS: It’s genuinely terrifying. I’ve been writing for twenty years, and I’ve been through revisions with agents and editors—and a self-imposed rewrite that could have cost me my publishing contract. It’s not enough to have written a good book. At a certain point the story stops being the writer’s alone and becomes something shared and amplified by the act of being read. It’s a blessing to be at that point, and to be here with the novel that I wanted to write, being presented in the way that I wanted to share it with readers. I got an email of praise from George Singleton, which is too wonderfully profane to quote here, but to have my novel embraced by writers I admire, writers who don’t know me beyond what I’ve committed to the page, is an incredible feeling. 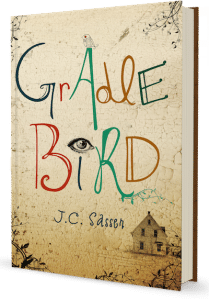 JH: Where can readers go to find your book and to learn more about you?

JCS: I hope folks will stop by my website, www.jcsasserbooks.com, and visit. If you’re a real true friend, remember to honk three times, just like Delvis tells Gradle.

With her writing partner Bren McClain, author of One Good Mama Bone, J.C. Sasser will co-teach a writers workshop at the second annual Pat Conroy Literary Festival on Thursday, October 19. (Click for details.) She will also appear in Beaufort as our Visiting Writers Series on October 27 in conversation with Conroy Center executive director Jonathan Haupt, where they will continue this conversation as a Porch Talk Live session in partnership with the Beaufort County Library System, Nevermore Books, and Historic Beaufort Foundation. (Click for details.)