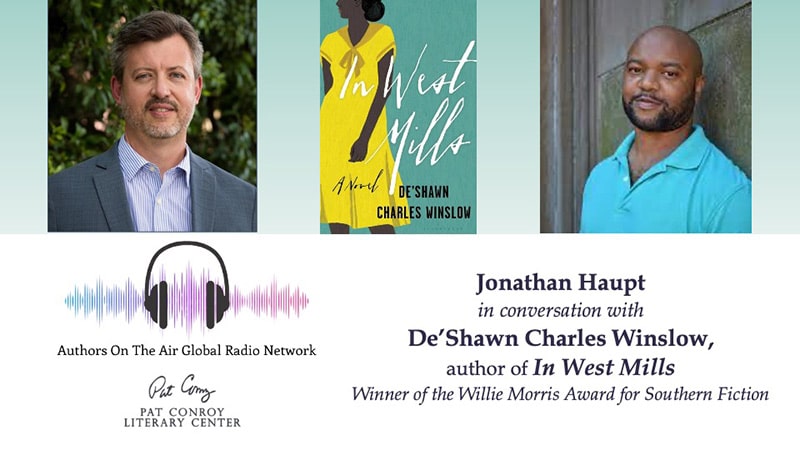 The Pat Conroy Literary Center and the Authors on the Air Global Radio Network proudly present executive director Jonathan Haupt in conversation with De’Shawn Charles Winslow, author of In West Mills, winner of the Willie Morris Award for Southern Fiction (2021), an American Book Award (2020), and the Center for Fiction’s First Novel Prize (2019).

“From the first page, Winslow establishes an uncanny authority and profound tone that belie the book’s debut status. The precision and charm of his language lure us in and soothe us… He paints a community so tightknit and thorough it becomes easy to forget the people in it don’t exist… Much of the story is told through dialogue, rich and truthful conversations among characters reminiscent of those in August Wilson’s plays, expressing so much more than what is on the surface.”–New York Times Book Review

“In West Mills is remarkable in its ability to create a fully realized world, the kind that feels like you must have visited before, a place where you’d happily spend all your time…. Winslow’s writing is full of compassion and wit and generosity; he skillfully weaves together a story of the power of love and friendship, and their ability to redeem even the most troubled souls. This is the kind of book that leaves you smiling, with faith in humanity, and in art’s ability to be gracious and redemptive.”–Nylon

“Winslow’s stellar debut follows the residents of a black neighborhood in a tiny North Carolina town over the course of several decades . . . Winslow has a finely tuned ear for the way the people of this small town talk, and his unpretentiously poetic prose goes down like a cool drink of water on a hot day.”–Publishers Weekly, Starred Review 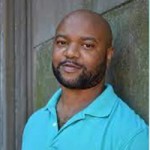 De’Shawn Charles Winslow was born and raised in Elizabeth City, NC. He holds an MFA and BFA in creative writing, and an MA in English literature. De’Shawn has received scholarships from the Napa Valley Writers’ Conference and the Bread Loaf Writers’ Conference. He lives in New York.
www.deshawncharleswinslow.com